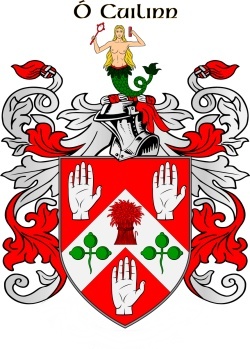 Design your own CULLEN Family Crest

Cullen is a multiple origin name, as many Irish surnames are (see list on Conway Page).

In fact the Registrar General, R. Matheson, lists 12 variants or synonyms of Cullen across Ireland, including the ubiquitous Collins (usually Ó Coileáin) from the 1890 births registrations.

The 1890 birth registration figures in Matheson's 'Special Report on Irish Surnames' (1909) found Leinster with the most Cullen births by far (132), and principally in Dublin and Wexford.

The Scottish surname Cullen is taken from a place in Bannfshire of that name, from Gaelic root 'cuilan'- 'little corner/nook'. Prefixed by 'de' - 'of', the surname was well established in North East Scotland from the 14th century. Many of the Glasgow Cullens, however, would have an Irish immigrant origin: and thus the demographics are similar to those of the surname Kelly, which is also of dual origin in Scotland.

THE many Cullen families in all parts of Co. Wexford may be of Gaelic or Norman stock. The main Gaelic sept of O'Cullen originated in south-east Leinster and were later chiefly found in counties Wexford and Wicklow. The Anglo-Norman Colyns were prominent proprietors up to the Cromwellian confiscation in the mid seventeenth century.

The distinctions between the Gaelic and Norman families is shown in the 1659 "census" which records 25 Cullins and Cullens in the Normanised baronies of Bargy and Shelburne, and 140 O'Cullens and O'Cullins in the more Irish baronies of Shelmalier East and West.

The Irish 'O' prefix was later discarded so that no O'Cullen is found in the Griffith Valuation and Tithe records for the first half of the nineteenth century.

The Norman family had their principal residence at Cullenstown Castle in Bannow parish where John Cullen held 180 acres in 1640. John Cullen was M.P. for Clonmines in 1634.4

Early references to the name in Hore's History of Wexford mention Richard Cullen, a burgess of Wexford who in 1537 was granted a holding in Cow Street, in the parish of Selskar. In 1543 Laurence Cullen of Cullenstown was a juror for an inquisition on the House of the Friars Minor in Wexford; in 1552 Richard Cullen was accused of shipping goods from Wexford to foreign parts, contrary to the law of the time.

In the rebellion of 1641, Lieut-General Cullen commanded the rebel army with General Preston at the Battle of Ballinvegga, near New Ross, in 1642. He is described as a 'generous, courteous, liberal and bold soldier'. In the Cromwellian confiscation the forfeited lands of Thomas Cullen of Cullenstown Castle were granted to Nathaniel Boyse.

The castle served as a dower house for the minor branches of the Boyse family and later for the Radfords, who were succeeded by the Sparrow family and then by the Burnsides. The battlements of the castle were removed many years ago and an ordinary roof put on the castle.

The Wexford historian, Kathleen A. Browne, quotes an old tradition that two old ladies who resided in the parish of Bannow in the early Dari of the nineteenth century were the last direct descendants of the ol Cullen family of the castle and that stone coffins in the old church a Bannow are said to belong to this family.

The most noted Wexford churchman of the name was Father James Cullen, S.J., a native of New Ross, who was one of the six founding priests of the House of Missions, Enniscorthy, in 1866. He specialised in promoting temperance, later became a Jesuit and founded the Pioneer Total Abstinence Association. His brother, J. B. Cullen, Bawnjames, New Ross, died in 1923.

Rev. Edward Cullen was parish priest of Newtownbarry (Bunclody) at the time of the Tithe massacre in the town on January 18, 1831. He built the old church there in 1823-25. Rev. Philip Cullen, a native of Greyrobin, in Kilmore parish, was pastor of Rathangan from 1836 to 1853.

Rev. Sylvester Cullen, Parish Priest of Our Lady's Island, who died in May, 1941, was born at Inch, Blackwater, in 1876. He studied in the Irish College, Paris, and was ordained in 1900. He spent the next three years as professor of French in St. Peter's College, Wexford, and served as curate in Monaseed, Caim, Marshalstown, and Gorey before his appointment to Our Lady's Island in 1928, following the death of Rev. Robert Fitzhenry. Fr. Cullen was the author of several plays and an accomplished musician. He was responsible for the opening of the present cemetery in Our Lady's Island in 1932.

Cardinal Paul Cullen, Archbishop of Dublin (1803-78) is stated to have been descended from a Cullen who migrated from the parish of Oylegate to Kildare about the middle of the seventeenth century. Two of his uncles are said to have been hanged in 1798 while his father narrowly escaped the same fate for sheltering Insurgents.?

Edward O'Cullen was a distinguished editor of The People Newspapers, Wexford and first editor of Ireland's Own in 1902. He was an authority on the history of Wexford, and his numerous notes in his paper are a neglected and very valuable source of County history.

The Cullen family of New Ross has been prominent in the building trade for generations, having built the parish church in New Ross, completed in 1902. A member of this family was Rev. John Cullen who was curate in Mulrankin-Tomhaggard and Screen where he died in 1953. The late Andrew Cullen was a member of New Ross Urban Council. Louis Cullen, the best known modern Irish historian, was born in New Ross. His mother was a Barry of Poulrane. Martin Cullen, the prominent New York Gael, was born in Glynn. Andy Cullen, Yoletown, Ballycullane, is a former All-Ireland ploughing champion and world ploughing competitor. Michael Cullen, Wexford town, won a number of national boxing titles in the 1960s.

Walter Cullen of Duncormick was a noted National Leaguer in the 19th century and his son, John, was a fluent Irish speaker and nationalist.

(Part 1 of 3) The Cullen name has a long history in Ireland, but now DNA and some recorded history says its origin is from the south-west region of the Emerald Island. The Cullen story [dominated by DNA tribal marker R1b-L513, Subgroup O2] can trace their beginnings to what is now County Kerry from 50 BCE. Perhaps the journey begins with the Clanna Dedad; Deda, son of Sen or Deda Mac Sin. The Cullen surname origin is possibly a branch of what will become the Dáirine [R1b-L513] who are found in south Ireland around 300 CE.

(Part 2 of 3) According to research, the Dáirine will join with the Dál Riata of north-east Ireland and invade Scotland around 500 CE. But how could this be? Recent discoveries from DNA testing are unlocking the migration patterns of Celtic tribes as late as 800 CE to 1200 CE. The Cullen story begins in pre-history Ireland but many of his descendants will then move to Kintyre, Scotland where they and other R1b-L513 members will form the Dalriada. This line and many of his kin will then travel to Brittany, France during the Dark Ages.

Areas of Origin for CULLEN

Write an email address and click 'Invite' to share this page with more members of the CULLEN tribe.

Discover where the CULLEN Family members live around the world

Show off the CULLEN Family Crest…