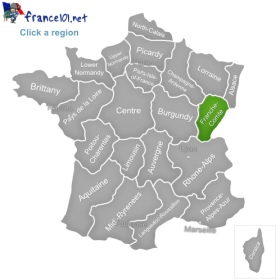 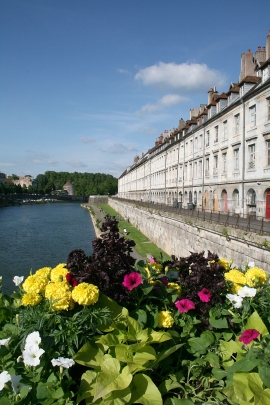 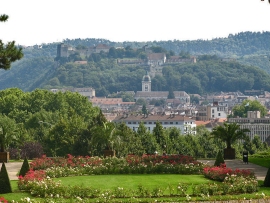 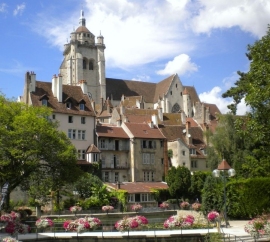 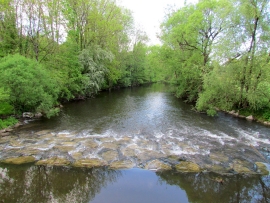 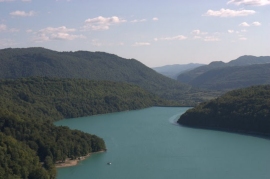 Vouglans_Dam_(Upstream),_Jura,_France - By Annick MONNIER (Own work)
[CC-BY-SA-3.0], via Wikimedia Commons

Franche-Comte is a small region in the East of France which borders with Switzerland. As such, this region, whose name means “Free County”, has very similar geography, architecture, and food to its politically neutral neighbor. This, however, doesn’t mean that the region, birthplace of Victor Hugo and Louis Pasteur, doesn’t have a spark of its own. On the contrary, this seemingly quiet region has much to inspire awe in visitors.

Like Switzerland, Franche-Comte is a region of extremely beautiful and diverse nature. It has two mountain ranges, the Vosges and the Jura ranges, which may not be as tall as the Alps but still offer beautiful sights and are great for practicing winter sports. The region also counts with valleys where tiny villages that look like they have been taken from a storybook can still be found. Perhaps the most beautiful and popular natural attractions, however, are the regions several lakes, gorges, and waterfalls in the Region des Lacs. The Reculee de Baume les Messieurs, the Les Cascades du Herisson, and the Baumes les Messieurs whose fluvial beauty is unmatched, are all among the top 5 things to see in the region. These lakes are especially popular in the summer, where both visitors and locals can enjoy cooling off and swimming in them. Though not very active in the winter, the lakes are still a majestic sight, and attract people willing to put up with a little cold in order to catch an unforgettable view.

The region stands out for its cheeses since it has one of the largest cheese-making industries in the entire country of France. The most famous regional cheese is, of course, Comte, a favorite of French people all around the country. Other delectable cheeses that make this region proud are the Munster, the Bleu de Gex, and the Metton. If you want to continue with the regional tradition, you can also try the Vin jaune, which is the regional wine.

The most important cities in Franche-Comte are Montbeliard, Belfort, and Besanç on, the regional capital. As in other small regions, these cities are fairly small and quiet, and are a great place to rest and enjoy a proximity to nature. Besanç on was named France’s first green city and is considered to be a principal town for history and art. Its historical centers one of the most beautiful in France, and the Doubs river encircling the town gives it a magical feel rarely found anywhere else. The town also still has several Roman, Medieval, and Spanish Renaissance remains, buildings, and churches. The most visited sight, Vauban’s citadel was named a UNESCO World Heritage site in 2008.

Besanç on is also the city where major music festivals are hosted annually. Although it is a small town, Besanç on brings in extremely varied music, with festivals ranging from Classical to jazz to rock to street music. This variety is indicative of that love of the arts, openness, and variety that gives the capital city, and the entire region, that special something that can be found even in its most isolated mountains.