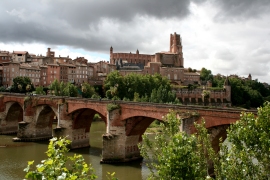 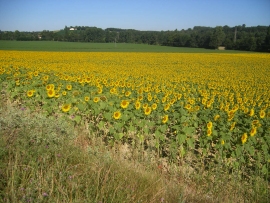 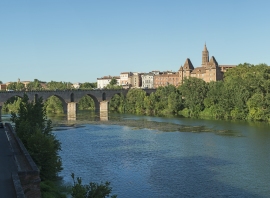 Montauban_-_le_Pont_Vieux - By Didier Descouens (Own work)
[CC-BY-SA-3.0], via Wikimedia Commons 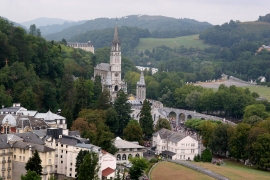 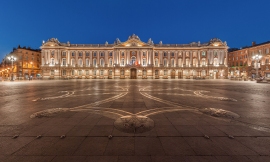 The Midi-Pyrenees is a Southern region in France that is separated from Spain by the Pyrenees mountain range. It is the largest region in the entire country, with a surface area greater than several European countries.

What makes the Midi-Pyrenees region unique is the interesting makeup of its population. Its capital, Toulouse, is the fourth largest city in France, and one of the most populated. This is sharply contrasted by the rest of the region, which is mostly farmland. In fact, the region has the most farmlands of all French regions and is one of the least populated areas in Western-Europe. This means that there is a sharp difference between the capital city, where life is busy and diverse, and the quiet, simple life of the rest of the region.

With its Roman architecture dating back to the time when it was a Roman settlement, Toulouse, or the Pink City, is one of the most famous in France. Its large student population means that the city is diverse and full of international residents. Toulouse is also one of the most alternative cities in the entire country, so you will find a huge art and student movement, as well as several underground film, art, and party spots.

The city center is relatively small, which means that it is very walkable and lends itself to very pleasant sightseeing. Some of the sights you cannot miss are the Basilique Saint Sernin; Pont-Neuf, a 16th century bridge; the city’s museums such as Les Augustins and the Georges Labit Museum; and the city’s impressive Capitole. Because Toulouse was not bombed during World War II, the city’s architecture is largely preserved and original. For anyone who loves strolling around, a walk along the Canal du Midi is a perfect way to spend time when the weather is nice.

Getting away from the city does not mean that you cannot enjoy this beautiful region. On the contrary, some of the most amazing sights the Midi-Pyrenees offers are away from its urban center. Lourdes, the town where millions of pilgrims go to as part of their devotion to the Virgin Mary receives even more visitors than the capital itself. The town of Albi houses the Toulouse Lautrec museum, and the incredibly amazing Cathedrale Sainte Cecile. The villages of Gaillac, Cordes-du-ciel, and Bastides offer beautiful architecture, a look into small French town life, and delicious cuisine. The region’s natural park, the *Parc National des Pyrenees*, comprise the beautiful mountain range that offers hiking, walking, climbing, and snow sports, as well as breathtaking views. There are also the Niaux Caves that you can explore in Tarascon-sur-Ariege, and the Pech-Merle grottes in Cabrerets.

For anyone looking to relax and take care of their body, this region offers several spa towns, with one of the most famous ones being the Bagneres-de-Luchon. Luchon stands out from the spa towns because it houses the Vaporium, the only natural Hamman in Europe.

While in the Midi-Pyrenees don’t forget to eat duck, the delicious specialty of the region.