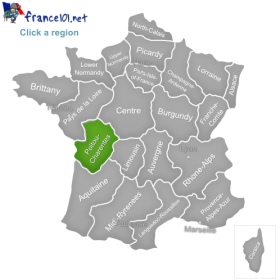 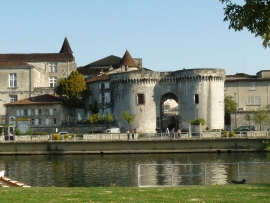 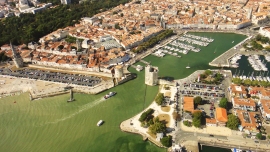 La_rochelle,_Le_vieux_port - By Mister Brown (Own work)
[CC-BY-SA-3.0], via Wikimedia Commons 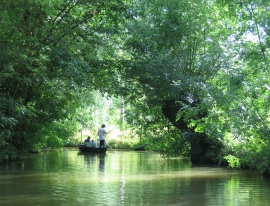 MaraisPoitevin - By Gilbert Bochenek (Own work)
[CC-BY-1.0], via Wikimedia Commons 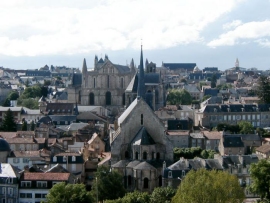 Poitiers_hill - By Vermario at en.wikipedia
[Public domain], from Wikimedia Commons 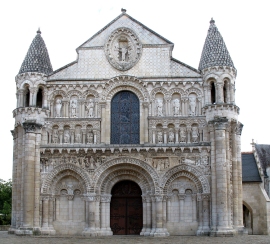 Poitou-Charentes' charm is rooted in its interesting history that tightly connects it with England and the United States. As the consequence of a royal marriage, the region came under English control in the 1100s, and was part of the kingdom for hundreds of years. The legacy and influence of the English is still very evident in several parts of Poitou-Charentes.

In the same way, the region has influenced certain parts of North America, namely those like Quebec and Louisiana, since most of the Cajun immigrants that came to these regions were from this part of France.

Perhaps one of the greatest attributes this Southwestern French region can claim for itself is its gorgeous Atlantic coastline. It is this coastline that attracts foreigners and French citizens towards the region in the summer months, and the reason why many Europeans choose it as their vacation home.

The coastline also gives Poitou-Charentes beautiful fishing villages where fresh, delicious seafood is cheap and abundant. Ports like the Old Port in La Rochelle, and the Port de la Cotiniere in Saint-Pierre-d'Oleron give this region's coast part of its uniqueness and charm.

Besides its coastline, the region is very well known for the cognac it produces, and for the city that has given the famous drink its name. If you're a fan of cognac, visiting the city and going on a tour to see the process of production is a must. Even if you don't have time to do a tour, you should order this spirit in any city or town in the region, since it is an important part of the local culture.

The regional capital of Poitou-Charentes is Poitiers. Though it is largely industrial and relatively small, the city has impressive architecture like the church of Notre Dame la Grande and the Saint Pierre Cathedral. Its city center is completely pedestrian, and it is a perfect place to enjoy the French Cafe experience, and people watch. The Parc de Blossac is also a favorite place to visit, especially in the warmer months, when people flock to the park to read, picnic, nap, and enjoy the sun.

Poitiers, however, is rivaled in economic importance, and tourism by the gorgeous La Rochelle. Bringing in visitors from foreign countries as well as from bordering French regions, La Rochelle is a perfect place for a short holiday. In the summer, its beach attracts people that want to practice water sports like surfing, and in the winter its cold water is a beautiful site to take in from a cafe. Its oysters and other seafood are delectable, and its medieval architecture, which has left the famous Towers of La Rochelle, leave an impacting impression on visitors. La Rochelle is also known for its Natural History Museum and, more importantly, its incredible aquarium.

Other great places to visit in the region are the Monolithic Church Saint-Jean of Aubeterre in Aubeterre-sur-Dronne; the Women's Abbey, which represents the musical hub of Saintes; and the beautiful town of Roquefort.