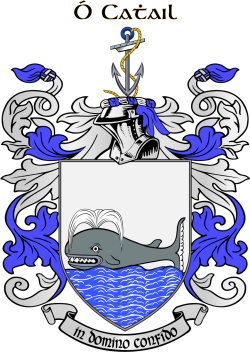 Design your own CAHILL Family Crest

Ó Cathail- meaning probably 'strong in battle' from 'cath' or 'battle'. One of the oldest Irish surnames according to Woulfe, ('Sloinnte Gaedheal is Gall' 1923)

Mac Cathail- either the same meaning as above, according to Woulfe; or, according to MacLysaght ('Surnames of Ireland' 1980s ed) from personal name 'Cathal' meaning 'valour'.

Ó Cathail- several unrelated septs of the name, of which the most powerful were a sept of Cinel Aodha (Hugh's People) in Co Galway, and a sept of the Eoghanachta of Loch Léin in Co Kerry, and thus descendants of the legendary king Aillil Olumm. There was also another notable sept who gave their name to Ballycahill ( the settlement of the O'Cahills) in Co Tipperary; and yet another near Corofin in Co Clare.

Mac Cathail is rarer, being found in counties Donegal, Tyrone and Cavan.

The Registrar General's Report on births in 1890 recorded most Cahill births in counties Cork, Kerry, Dublin, Kilkenny and Tipperary.

Two famous bearers were:
Joseph Cahill (1891-1959) Premier of New South Wales in Australia.
Joe Cahill (1920-2004) Commander of the Belfast Brigade, and one time Chief of Staff of the Provisional IRA during the recent 'troubles'

I'm looking for more information on my family history or possible learn to know if I have family members left. My grandparents were John c. Cahill and Sally Cahill and they came from New Jersey. MY father is James c. Cahill. I am last member of the Cahill that's I know of.

Hi, My grandfathers brother and sisters Hugh Cahill emigrated to the USA the new jersey area. sometime in the late 1800. I would like to trace any relatives in USA. Thank you

Looking for G.G.Grandfather James Cahill. Born in Tipperary 1834. Married Annie McGlinnen from Donegal 1860?? Arrived in Australia 1860-1862 I would like to know where the family lived, or any known relatives. Visiting Ireland in June

Searching for John and Johanna Cahill of Kerry near Killarney who came to America in about 1847-48. They had 4 sons-Daniel, born about 1848 in Canada (?), Cornelius and Peter Paul born 1850-1853 in New York City and Maurice, Born in Zaleski Ohio in 1859. John Cahill died in Zaleski in 1859, shortly after Maurice was born. Johanna died in Chillicothe OH in 1881. Johanna's maiden name was Cronin.

Im trying to find information on the Cahill family in Boherbue early to late 1800s.

my greatgrandfather patrick cahill was born in co. donegal in 1838 and died in dunbar, pa. usa on june 16,1890 along with his brother william in the hill farm mine disaster. he married margaret lafferty who was born in 1847 in glasgow, scotland and died jan. 12,1904 leisenring, pa. usa.

Areas of Origin for CAHILL

Write an email address and click 'Invite' to share this page with more members of the CAHILL tribe.

Discover where the CAHILL Family members live around the world

Show off the CAHILL Family Crest…